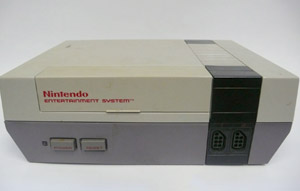 Everyday folk discovering colossally valuable collectors’ items amid everyday junk has been the lifeblood of antiques shows for years, but it’s not every day you see a real-life gold-in-the-attic tale play out on eBay.

Last week, North Carolina eBay user lace_thongs35 thought she was putting up an everyday, 80s-era Nintendo Entertainment System (together with five games) up on the popular auction site. But less than an hour after the first bid, the price was over $6,000 — and on Wednesday, when the auction closed, the final selling price topped $13,000.

Why? Not the console itself, but one of the games bundled with it — a deeply obscure 1987 release called Stadium Events, a highly sought-after collectors’ item. But it wasn’t even the game itself that was worth the bulk of the money — it was the original cardboard box, which collectors value at a breathtaking $10,000. Fewer than 10 complete copies of the game are thought to exist, and retro gaming aficionados consider it one of the hardest-to-find NES games ever made.

Just for some clarify, here is a video of said title: